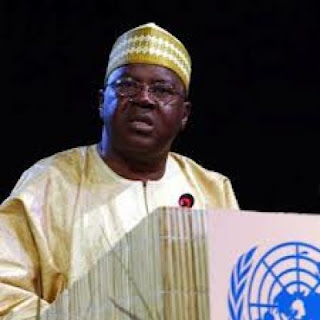 Barely five months after the demise of former Vice-President Alhaji Aliu Mahama, a feud has ensued among members of his family over his properties. The struggle pitches one Mohammed Aliu, the eldest son of the late Vice-President, on one side, and his stepmother, Hajia Ramatu, who remained the Alhaji’s wife until his demise last year, on the other.

There are also reports of some extended family members interested in Alhaji Mahama’s properties. The late Vice-President’s properties are said to include houses, fleet of vehicles, industries, plots of land, farmlands and an assortment of investments.

Who gets what has become thorny as the late Vice-President reportedly died without a will.

A family source told The Finder newspaper that some individuals in Hajia Ramatu’s circles have refused to recognise Mohammed Aliu as the biological son of the late Vice-President in order to rule him out as an heir to his property.

Hajia Ramatu in her letter of administration prepared recently lists only her four children – three sons and a daughter – as the rightful children to inherit her husband’s properties.

Upon sighting the letter of administration omitting his name from the list of the Vice-President’s children, Mohammed quickly rushed to the court to place an injunction on it.

She told The Finder that she met the late Alhaji Aliu way back in 1967 and that they had a child two years later despite the fact that they were not married.

Hajia Sanatu said the late Vice-President was still pursuing his degree course at the then University of Science and Technology (UST).

She said Alhaji Aliu Mahama directed her to stay with his mother in his hometown, Yendi. Hajia Sanatu said due to maternity challenges she requested to return to Tamale for safe delivery, which was granted by Alhaji Aliu’s family.

After delivery all the necessary outdooring rites were performed by the family of Alhaji Aliu Mahama, including naming the child after Aliu’s father, Mohammed, she said.

Hajia Sanatu said all the care, love, affection and security that a father bestows to his child was done by the late Vice-President.

Also, a prominent uncle of Mohammed Aliu, the chief of Choggu, Naa Yakubu, revealed that the former Vice-President never defaulted in performing his duties as an in-law to the family.

“He has always participated in all events concerning the family,” Naa Yakubu said.

He said the family has also been consistently supportive of the late Alhaji Aliu’s family as their in-laws, and on the occasion of his demise they performed their role per Dagbon tradition as in-laws by presenting a ram and cash as the contribution from the maternal family of the first son of the deceased.

Meanwhile, sources close to Hajia Ramatu, the widow of the late Vice-President, has indicated that her move to apply for application of entitlement was borne out of information she had that some members of the family wanted Aliu’s properties to be shared among close to 30 dependants in addition to his biological children.