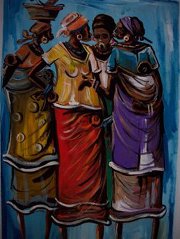 In a bizarre case, a Domboshava man and his biological mother are reportedly on the run after having an incestuous relationship that culminated in two pregnancies. Simon Matsvara and Ethel Vhangare are from Pote Village under Chief Chinamhora.
Simon first impregnated his mother while his father Agripah Matsvara was alive and for the second time after his death.
It is alleged that the first time Simon impregnated his mother, she had a miscarriage.

However, this time Vhangare is alleged to be five months pregnant and Simon is responsible.
The pair reportedly fled the community recently after getting news that Chief Chinamhora, Simon Chidziva, had sent his aides to arrest them.
It is alleged that Vhangare’s husband, Agripah, suffered a stroke in 2008 and relatives reportedly assigned Simon to assist his mother take care of the father.

Later in the same year, it is alleged Vhangare started vomiting and revealed to a neighbour that she was pregnant and her son was responsible.
Family elders reportedly resolved the matter before fining the pair an undisclosed number of cattle.

Two months later, Vhangare suffered a miscarriage before her husband’s death in 2008.

Simon and his mother reportedly continued with their relationship that resulted in another pregnancy.
The matter came to light after Vhangare absconded church services, prompted churchmates to pay her a visit.

It was then discovered that Vhangare was pregnant again and neighbours reported the matter to Chief Chinamhora who sent his aides to arrest the two.
“We are going to hunt for the two and we will punish them severely to send a clear message to would-be offenders that we do not tolerate such acts,” the chief said yesterday.
In a related incident, another pair from Mutonda village under Chief Chinamhora, was fined three beasts after siring two children in an incestuous relationship.
A 26-year-old man and his niece (22) reportedly cohabited as husband and wife since 2007.

They bore two children now aged four and one.

The matter came to light after the man’s uncle filed a complaint upon realising that his sister’s son had paid a bride price for his daughter to his brother-in-law.

In passing sentence, Chief Chinamhora ordered the man to pay two heads of cattle before relocating permanently to his paternal homestead in Rusape.

The woman was ordered to pay a cow.
“Children are lacking guidance, especially in divorced families. Divorced parents need to set aside their difference for the benefit of their children.
“We are Africans and our culture is being eroded. Parents must unite and send children to holidays such that they are in touch with their relatives and respect each other’s totems,” he said.