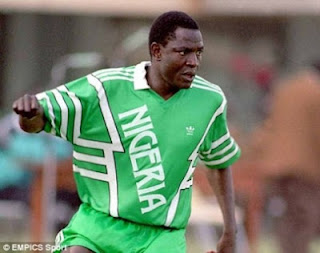 According to a close source, Yekini was sick for a while and was taken out if his weeded house for treatment but died on May 4, 2012 at about 9:35pm in Ibadan.

While speaking on a social network blog, Twitter, sport analyst Colin Udoh first reported: ‘Yekini has been moved from his house to his family house. Word from there is it’s critical at the moment #PrayForYekini and later tweeted CONFIRMED: Former Nigeria striker Rashidi Yekini is dead’

Fellow super Eagles team mate Mutiu Adepoju also confirmed the news to Godwin Enakhena saying ‘Godwin, it’s true, Yekini died in a hospital where his family took him after hearing of his poor state of health’.

Super Eagle ex-goal keeper Ike Shorunmu also confirmed to Saturday Tribune saying ‘It’s so sad but the truth of the matter is that our dear Rashidi Yekini is dead, Shorunmu lamented. ‘He died in a private hospital in Ibadan. ‘The woman who had a daughter for Yekini told me this sad news and told me that he would be buried today in Ira, Kwara State’, said Shorunmu.

There’s been no official statement from the family.

Born October 23, 1964 in Kaduna, Rashidi Yekini played in Nigeria’s premier league before seeking greener pasture in Ivory Coast to play for Africa Sports. He later went to Portugal and Victoria Setubal where he eventually became top scorer in the Portuguese league.

His performance earned him the African Footballer of the year award in 1993. In 1994, Yekini scored Nigeria’s first world cup goal against Bulgaria. He had a total number of 37 goals in 58 games for his country national team, Super Eagles.

Though dead, his memorable goal against Bulgaria at USA 1994 World cup in a match that ended 3-0 in favour of Nigeria, as well as his other career exploits will definitely ensure he lives on. His simple tap-in strike gave the Super Eagles the needed confidence to go all the way in the memorable World cup  in their first world cup appearance before Maradona’s ‘hand of God’ ended Eagles dream.

And it’s not just Yekini’s goals that’ll linger in Nigerians’ minds, in remembrance of this icon; his absolute expression of an undying jubilation will definitely be in our memories for many years.

What remains with everybody is Yekini’s reaction as he gripped the netting and wailed with delight throwing his fists into the air to enjoy his moment of history. Yekini’s team-mates allowed him to blow off steam in the glory of Nigeria’s first goal in the World Cup before he untangled himself to take their acclaim. The image of the forward letting it all out remains one of the iconic moments in World Cup history.  It was a crude emotion at its best

Last year, there had been some sad news about the player, when photographs of his estate which was overgrown with weeds and situations suggesting his abnormal behaviour were published.

Following the death of this football legend, fans and football lovers all over the world have taken to twitter with their condolences.

Media spokesman for ENP Project Kayode Tijani immediately took to twitter to express his mind about the sad event. He wrote: In My Chronic Sorrow at My Friend Rasheed Yekini’s Death He was NEVER Mad as rumoured; a Contented and Religious Life.

Storm record boss Obi Asika expressed his feelings by thanking the all-time highest goal scorer in Nigeria Super Eagle ‏ ‘I want to thank Rashidi Yekini, an iconic Nigerian legend who passed this evening for the joy he gave millions. May his soul rest in peace!’.

For others Rashidi Yekini was one of the notable figures that should be honoured with a state burial for his contribution to Nigeria’s football. FSM ‏ @faruksm wrote on twitter ‘If anyone deserves a state funeral, Rashidi Yekini is that person. But will they give him one? That’s the question‘.

Rashidi Yekini is survived by 3 wives and 3 children and will be buried according to the Islamic rite today May 5, 2012 in Ira, Oyun local Government in Kwara State.

May his soul rest in perfect peace.

2face in a secret wedding

van vicker, uche jombo and others detained in lagos