Written by Gossipghana on August 4, 2012

The 16-year-old’s dramatic ascent to the top of her sport came despite her parents’ crumbling marriage and a long-distance relationship with her dad, Air National Guard Staff Sgt. Timothy Douglas.


The athlete’s father went to London with his brother and their parents, but they couldn’t land any tickets to watch Douglas compete, said Alfred Puryear, public affairs officer for the Virginia National Guard.

Gabby hadn’t seen her dad in two years when he surprised the teen by popping into the U.S. Olympic trials in late June.
But he stranded outside the arena when the teen known as the “Flying Squirrel” vaulted into America’s heart with a second gold medal by winning the all-around title.

Douglas has earned the nicknake ‘The Flying Squirrel’ for the amazing height of her routines
Timothy Douglas was stationed in Afghanistan as part of the Air National Guard, 203rd Red Horse Squadron, until his latest deployment ended last October.
Douglas flew into San Jose, Calif., to watch his daughter earn her spot on the U.S. team this summer.
At the time, Gabby recalled hearing her name coming down from the crowd at the trials. She looked up to see her father waving a U.S. flag with her name written across the stripes. 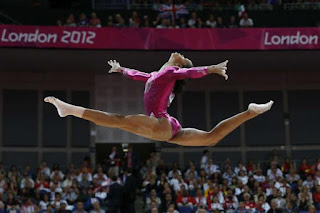 “There’s a feeling that you can’t describe,” the elder Douglas told the Des Moines Register after the reunion. “I just missed her so much.”
Douglas said he provided advice from afar, encouraging his daughter to never give up on her dreams of a gold medal. The pair kept in touch via Skype.
Gabby Douglas credited the surprise visit for giving her a huge boost in the qualifying competition.
“I was like, ‘OK, you’ve got to get it together,’” she recalled. “Seeing him made my night, actually.” 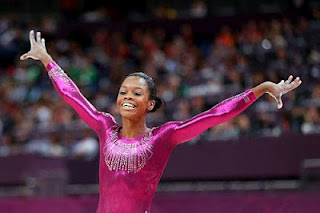 But she didn’t see him at the medal ceremony in London, and won’t be seeing him at home. Douglas and wife Natalie Hawkins split up before the Olympics, and are in the process of getting a divorce.
Hawkins had her own geographic separation from the gymnast after sending Gabby to West Des Moines, Iowa, for training in 2010. 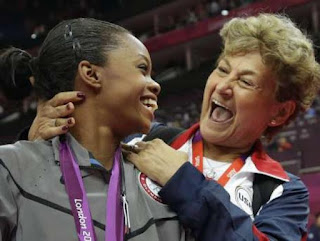 The family lived in Virginia, and Hawkins wondered whether she did the right thing by shipping her daughter away — right up until the London medal ceremony.
“I must have lost my marbles,” she said afterward. “But she wanted this more than anything.”