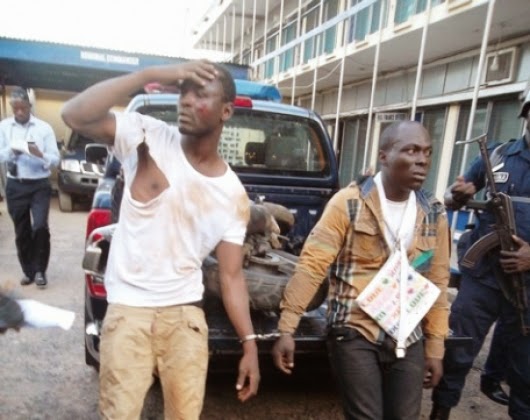 The Tema Police have arrested two suspects for allegedly carrying out two separate robberies at ECOBANK and the Ghana Commercial Bank, both at Tema Community One.

The robberies are said to have been carried out about 3 p.m. yesterday, April 1, 2014.
The suspects have been identified as Mohammed Ahmed, 31, a motor mechanic who lives at Dome in Accra, and Emmanuel Ahiagbedzi, 23, a resident of Accra New Town.
During a search on them, the police found a pistol, a Nokia mobile phone, GH¢2,605, as well as a talisman in a lady’s bag they were carrying.

At a press briefing in Tema yesterday, the Tema Regional Police Commander, DCOP Mrs Beatrice Zakpa Vib-Sanziri, said a police patrol team from Tema Community Two had information that the suspects had robbed some customers of the banks of their money.
Based on that information, the patrol team pursued the robbers, who were riding an unregistered motorbike.
Realising that the suspects might escape, the driver of the police team, Corporal Stephen Kyei Mensah, used the police vehicle to push the motorbike.
As a result, the suspects fell down from their Honda motorbike, enabling the police to arrest them.
DCOP Vib-Sanziri commended the public for the timely information leading to the arrest of the suspects and charged security officers manning the various banks in Tema to be extra-vigilant.
He advised bank authorities to give information on criminals timeously, so that they could be arrested on time.