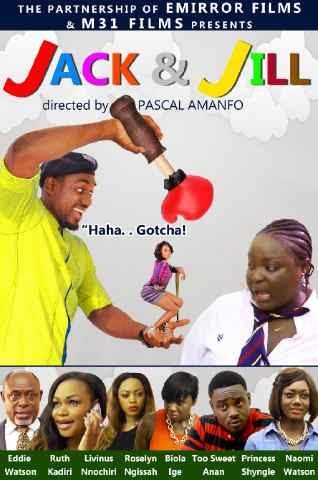 After featuring in movies like 4 Play, Single and Married, Single 6, Purple Rose and others, Liberian-born Ghanaian actor, Eddie Watson Junior is set to release his first self-produced movie, ‘JACK AND JILL’.

‘Jack and Jill’, a comedy movie talks about how ‘hard is it to imagine love between two people entangled in a web of lies, deceit and pretence but when Jack runs into a beautiful young girl on the streets of Accra one sunny afternoon, he begins a slippery journey into a world of uncertainty that ends in nothing else but laughter.’

Talking about the need to produce his own movie, the actor and entrepreneur said “producing your own is a great way of bringing to life stories you believe or find interesting. It’s a way of expressing yourself as well”

The actor, who gave up his job at Rising Data Solutions Ghana Limited to join Ghana’s movie industry, said continued that “Through your own production you can easily express your religious, social or political views or even bring to the surface something you thing is dark or just comical. But most importantly it gives you the opportunity as an actor to not just decide what type of characters you want to play, but you get to decide what kind of material you want the public seeing.”

According to Eddie Watson, “You can help shape the minds of people for the good with the morals you teach. And of course producing your own movie shows some level of growth as an actor.”
Jack and Jill is a movie directed by Pascal Amanfo and features actors like Eddie Watson, Ruth Kadiri, Roselyn Ngissah, Livinus Nnochiri, Biola Ige, Toosweet Annan, Naomi Watson and others. The movie produced by Emirror Films in partnership with Pascal Amanfo’s M31 Films will be premiered in September this year.