Written by Gossipghana on September 8, 2012 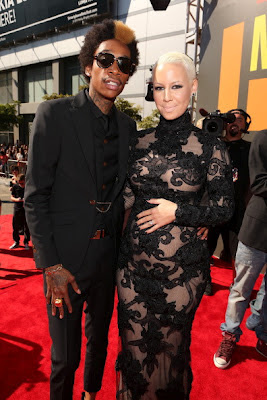 Who remembers when Beyoncé revealed her baby bump at the MTV VMAs last year? A similar surprise occurred at the 2012 edition of the awards as Amber Rose finally confirmed she is pregnant!

Rose, 28 revealed the good news after much speculation while on the red carpet session of the awards with one arm tucked in her fiancé Wiz Khalifa’s arm.

Her dress, a full-length fitted black lace gown clearly revealed her baby bump and the couple couldn’t take
their hands off it as photographers snapped away.

Back in March 2012, Wiz Khalifa proposed to Amber Rose. They couple is rumoured to be planning an October 2012 wedding.

photos from the mtv vmas show