Written by Gossipghana on January 8, 2013 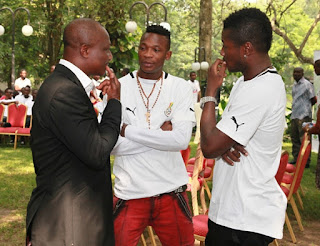 Ghana coach Kwesi Appiah will name his final squad for the 2013 Africa Cup of Nations today.

The Black Stars coach will name his squad to beat the deadline set by CAF for the teams participating in Africa’s flagship competition.

All the 16 teams participating in the competition must submit their 23 players by midnight of Wednesday.

According to the Ghana FA website, the Black Stars will hold their last training session on Tuesday before Appiah names his final 23 for the competition.

With just three days before Caf’s deadline for the submission of the final squad list Appiah, decided against gambling on the fitness of Ayew for the tournament which led to the latter’s exclusion from the squad.

Just 24 players are currently in the training camp and Appiah will have the daunting task of dropping just one.

With as many as seven central defenders in the squad, Appiah’s big axe could fall in that area of the team.

Ghana are placed in Group B where they face DR Congo, Mali and Niger in the tournament in South Africa.