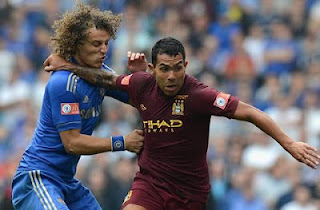 Chelsea have reportedly knocked back a £30million bid from Manchester City for defender David Luiz.

A report in The Sun claims the Brazil international was left out of last night’s 4-2 win over Reading at Stamford Bridge due to the two clubs being in negotiations – not because of a knee injury, as Luiz had earlier claimed on Twitter.

Blues boss Roberto di Matteo sees Luiz as crucial to his future plans and the report claims Chelsea would need a significant increase on the initial bid before considering the sale.

Roberto Mancini has already admitted defeat in the race to sign Liverpool’s Daniel Agger and the Italian is desperate for more defensive cover at the Etihad Stadium.

Micah Richards is currently injured and not expected to be available for nearly another three months; Kolo Toure has fallen out with Mancini over a lack of playing time and doubts remain over the ability of Stefan Savic to fill in.

Chelsea bought Luiz from Benfica in January 2011 in a deal worth around £21million.