chinua achebe to be buried today 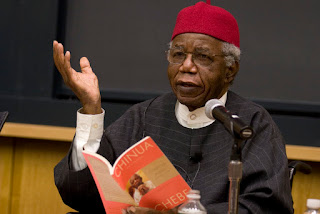 Renowned Nigerian author Chinua Achebe, who died in March, is due to be buried in his home town in Anambra state.

Mr Achebe’s body arrived in Nigeria yesterday from the US.

The author died in Boston at the age of 82 following a brief illness. Relatives and officials were at Enugu airport in southern Nigeria as the coffin was lowered from the plane.

Mr Achebe is widely regarded as the founding father of African literature in English. His 1958 debut novel,
Things Fall Apart, which dealt with the impact of colonialism in Africa, has sold more than 10 million copies.
He had been living in the US since 1990 after a car crash left him partially paralysed and in a wheelchair, returning to Nigeria infrequently. 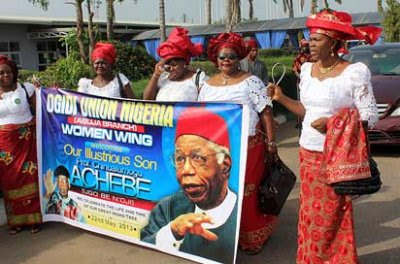 Reports say although people are mourning, the life of the influential Nigerian writer is also being celebrated.

Mr Achebe’s body is due to be buried near his family house in Ogidi, a small town in the hills of Anambra state, later today.