Written by Gossipghana on December 9, 2012

Chairman for the Electoral Commission, Dr kwadwo Afari Gyan on Sunday evening declared Ghana’s sitting president John Dramani Mahama as the winner of the 2012 presidential elections.
President John Mahama who ran on the ticket of the National Democratic Congress (NDC) polled 5,574,761 representing 50.70% to win the polls held on Friday and Saturday.
The presidential candidate of the New Patriotic Party (NPP), Akufo-Addo had 5,248,898 of the valid votes cast, representing 47.74%.
Out of the total 14,158,890 registered voters, 11,246,982 people exercised their franchise which 10,995,262 of them were deemed valid. The total rejected votes stood at 251,720. The turnout in the 275 constituencies is 79.43%
The flag-bearer of the Progressive People’s Party (PPP), Dr Papa Kwesi Nduom placed third in the elections with 64,362 votes representing 0.59. 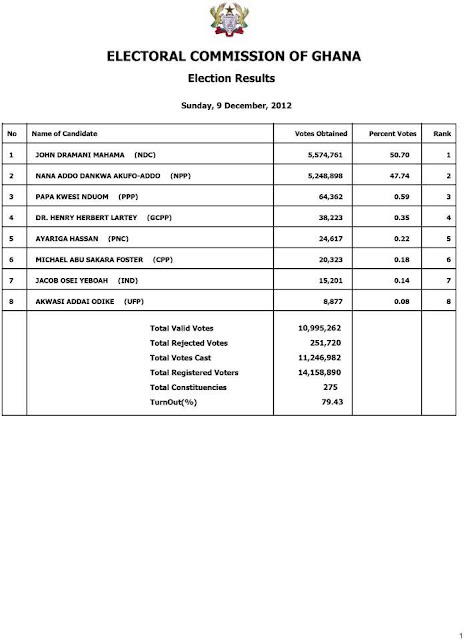 Press Statement by The NPP After Declaration of Presidential Results