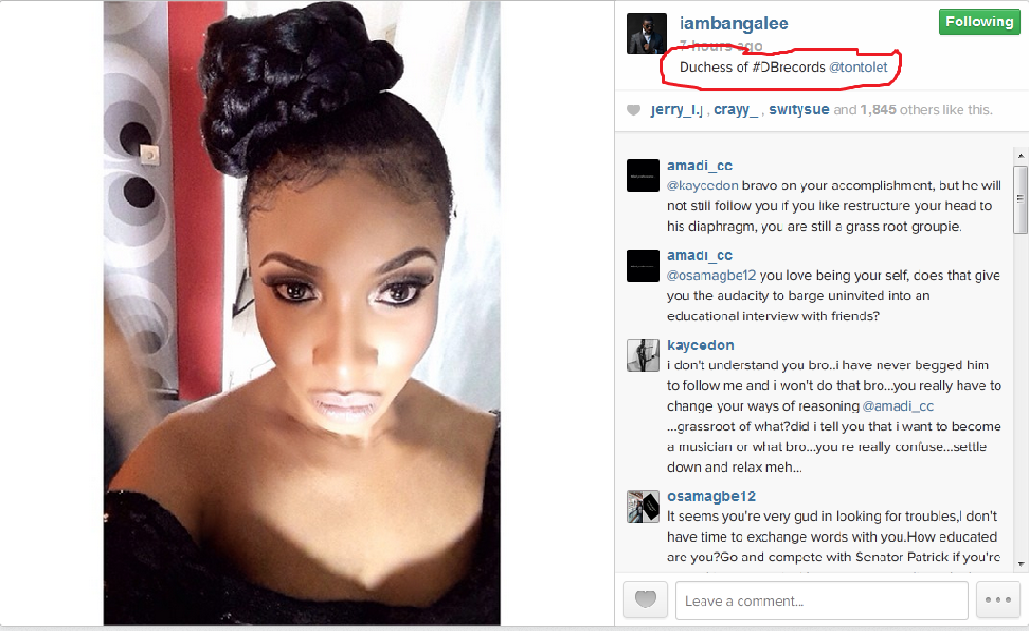 Award winning Nigerian artiste, D’banj has signed controversial Nollywood actress Tonto Dikeh onto his record label.
D’banj made the announcement via photo sharing site Instagram Tuesday that Tonto, who apart from acting is also into music, is now part of the DB Records family.

Over the past few years, Tonto has made frantic attempts to gain grounds in the Nigerian music scene just like she has done in movies.

Last year alone, she released several singles including, ‘Carriage’, ‘Jeje’, ‘Crazically’, ‘Get High’, ‘Itz Ova’, ‘Sheba’, and ‘Hi’ in a bid to cement herself as a force to reckon with when it comes to music.

D’banj posted a photo of himself and Tonto Dikeh with the caption: “To my birthday mate and the Duchess of DB Records.

Welcome to the LEE TEMPLE . Can’t wait for the world to see what we’ve been up to. I’m proud of u my daughter . #Pokolee #Tontolee #DBrecords @tontolet”
With about eight singles to her credit so far, there are indications that Duchess of DB Records may be preparing to release her first album under the label.

The renowned actress kicked off her music career in 2012 with the release of her first single ‘Hi’. She was heavily criticized by fans and some critics who argued that music was not for her.

Adwuma Yɛ is Designed to Inform Listeners about the latest happenings in Ghana/Africa, Exchange Rates, Jobs, etc.   Ad* Are you interested in sports in general – or maybe you are a fan of a particular team? Turn your passion into profit!