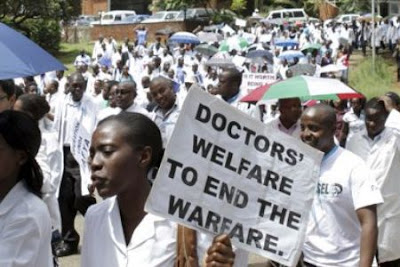 Members of the Ghana Medical Association (GMA), have sent notice that they would withdraw all out-patient services beginning Monday, April 8, 2013.

The members said they would, however, attend to patients already on admission and offer emergency services till April 14, 2013.

He said the members would suspend all medical services if their demands are not met by April 15, 2013.

Dr. Opoku-Adusei said the doctors would rescind their decision when there is clear evidence that government had corrected all the anomalies and payments duly made to members.

He said that members of the GMA “will not accept any piece meal and verbal solutions to these problems”.

Dr. Opoku-Adusei said that their action was to reactivate the road map suspended in February 2013 because of the government and its agencies’ refusal to pay members current market premium on 2012 basic salaries, contrary to the ruling of the National Labour Commission (NLC).
He said members resorted to this action because they had exhausted all avenues for negotiations with the authorities to resolve the issue, while awards/decisions of the National NLC had repeatedly been flouted by the Fair Wages and Salaries Commission.

The doctors have been demanding the payment of current market premium on 2012 basic salaries and arrears accrued since January 2012, the correction of reduced pension contributions and payment of their conversion difference.