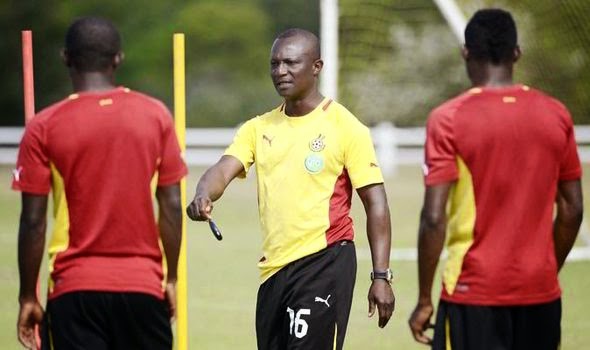 Ghana coach Kwesi Appiah says he has been impressed by the output of players in training sessions at his camp in Arnhem.

The Black Stars have held four training sessions since arriving in the Netherlands on Sunday morning to intensify their preparations for the 2014 World Cup.
The team moved to the European country having completed a four-day non-residential training program in Accra.
The training program in the Ghanaian capital was climaxed by an impressive performance in the Black Stars’ 6-1 win over a locally select side in an exhibition match last Friday.
The team is preparing now in the city of Arnhem ahead of another friendly match against the Netherlands in Rotterdam on Sunday.
Coach Kwesi Appiah has been impressed by the performance of his players as they put in the effort to catch the eye of the technical handlers in order to make the final cut for the World Cup in Brazil.
“We’ve done four training sessions and I am really impressed with the performance,” Appiah said.
“There is kind of competition, no one is sure of himself at the moment and for that reason anytime we get onto the pitch, everybody is fully attentive to what is being taught and everyone tries to do the best he can.
“And for me it is good for the team and I am really impressed.”
The Black Stars will move camp to the USA for the final leg of their preparations after the friendly against the Netherlands on Sunday.
Coach Kwesi Appiah will be taking his required 23 players for the World Cup in the USA after dropping three players.