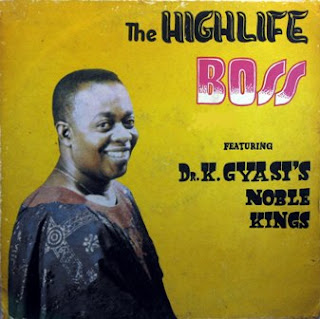 The death is reported of Highlife musician Dr. K. Gyasi, of Noble Kings fame. Family sources say he died on December 21 at around 7:30 am. He was 90. The veteran musician has been battling with Prostate Cancer for some time now, and it is believed that caused his death.

A week’s celebration will be held on Friday December 28 in his honour, during which plans for a fitting funeral and burial ceremony, will be made public.

A talented musician in his time, K Gyasi was one of the early pioneers of highlife music, contributing
immensely to the genre. He was one of few acts, who made the guitar instrument popular between the 1950s to 1970s. In the mid sixties, he experimented mostly with pop Highlife, breaking several records with soft-selling EPs.

Kay, as he is mostly referred to, Dr. K. Gyasi toured the United Kingdom and Europe in the summer of 1975, putting Ghana on the map, and enhancing the popularity of Highlife music.

He was associated with what came to be known as Sikyi Highlife, following in the footsteps of the likes of Jerry Hanson of the Ramblers International Band, who took up Classical Highlife and made it extremely popular.

Below is a message from the Musicians Union of Ghana.

One of the greatest guitarists and composers in the history of Ghanaian music, Dr. K. Gyasi has passed on. MUSIGA would want to, through this condolence letter extend sympathy to his surviving family. Arguably one of the originators of Ghana’s Highlife, Dr. K. Gyasi was born into a musical family in 1929 and raised in Patasi, a suburb in the Ashanti Region. He played guitar with the Appiah Adjekum Band and made his first recording two years later. In 1963, Dr. K. Gyasi was already a popular household name where music was concerned and even got invited by President Kwame Nkrumah to accompany him on various trips. Dr K Gyasi formed his Noble Kings Band later on in his career and for most part of his career, him and his band were successful and produced various hits. He also formed a theater group that toured various villages and provided various levels of entertainment to them. He is one of the musicians whose works were affected badly by the various coups that happened in Ghana some years back. Dr K Gyasi has contributed immensely to the growth of the authentic Ghanaian Highlife tune. His loss will be felt by a lot of people in and out of the musical circles. Indeed Ghana has lost a precious gem. To the family he has left behind, MUSIGA wishes you strength and grace and may the Good Lord be with them.