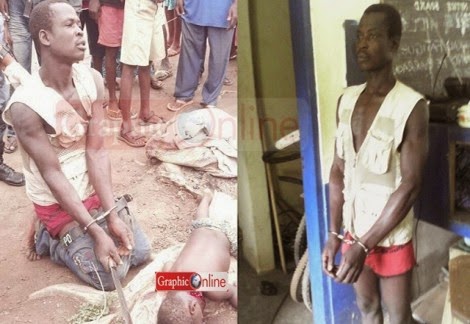 Tragedy struck the Kpeyiborme community, near Kpeve in the Peki District, last Friday when a 37-year-old farmer brutally murdered his three-year-old son.

The suspect, Gideon Abotsi, aka Jarah, allegedly severed the head of his son, Sitsofe Abotsi, with a machete on a piece of wood to protest his wife’s decision not to have sex with him again.

Abotsi is currently in the custody of the Peki-Avetile Police, who are conducting investigations into the matter.

Meanwhile, members of the farming community are still in a state of shock over the conduct of the suspect and wondering what could have come over the man, whom some described as reserved and calm and who lived peacefully with his wife, Sena Ahiable, and their children.

According to some neighbours, they had lately witnessed a change in Abotsi’s behaviour, as he easily picked quarrels with his wife.

Sitsofe’s mother is said to be devastated and inconsolable.

The Peki District Police Commander, Deputy Superintendent of Police (DSP) Mr Jonas Agbevam, said Abotsi had confessed he had been under the influence of Indian hemp that day.

Narrating the incident to the Daily Graphic, Mr Agbevam disclosed that the suspect and his wife had been married for 11 years and had four children.

The boy he allegedly murdered was the last of his children.

Mr Agbevam stated that the suspect and his wife had, for some time now, been having misunderstandings over the upkeep of the children, with the woman alleged to have accused the man of being irresponsible, for which reason she would not allow him to have sex with her to prevent any unwanted pregnancy.

Following that argument, the woman allegedly packed her belongings from her matrimonial home and went to stay with her mother-in-law.

Peeved by his wife’s behaviour, Abotsi, last Friday, reportedly went to his mother’s house, picked the small boy from his grandmother and took him to his house.

Taking advantage of the fact that his neighbours had gone to farm, the suspect allegedly put his son on a piece of wood and cut off his head with a machete.

The boy’s mother, who had been informed that her husband had come for the child, subsequently went to the house, only to witness the gory scene.

According to the police, the woman shouted for help and Abotsi, sensing danger, decided to run away.

However, he was chased by some youth of the town and arrested.

The police were informed about the incident and they, consequently, went to the house to arrest the suspect.

The body of the boy, DSP Agbevam said, had since been deposited at the Peki Government Hospital morgue.