map of irregularities and violations in election 2012 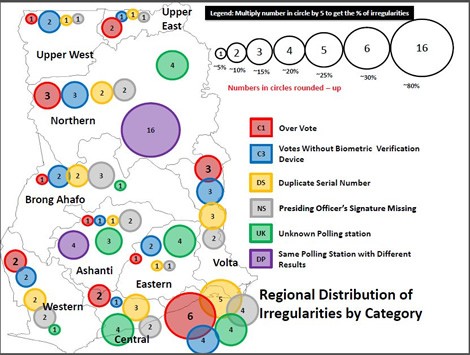 As part of the evidence and exhibits presented to the Supreme Court of Ghana, the main witness of the petitioners, Dr. Mahamudu Bawumia also presented to the Supreme Court in hard copy a geographic representation of the spread of the constitutional, statutory violations and irregularities that affected the conduct and outcome of the December 7, 2012 General Election.

This map was contained in the powerpoint presentation presented in hardcopy to the judges of the Supreme Court.

A glance at the map indicates that indeed, the elections of December 7th were affected hugely by the various irregularities and violations which occurred in various degrees all over the country. Every single region and every one of the 275 constituencies was affected by the multiple forms of irregularities.

The irregularity map shows the various categories of irregularities which affected the vote in the various regions and the degrees to which they occurred.

In all the analysis from the 11,138 polling stations the petitioners are requesting the Supreme Court to annul, the Greater Accra region was the region most affected by the irregularities, violations and malpractices during the December 7th elections. As a result, 1,044,532 votes in total would have to be annulled from the region’s total valid votes cast.

Following closely is the Volta Region, from which 550,057 votes would have to be annulled from the total valid votes from the region. The Western and Central Regions follow in that order with 500,485 and 499,270 votes to be annulled respectively.

The Northern, Brong Ahafo and Eastern Regions are next in the queue of regions most affected by the irregularities with 482,288, 399,218 and 301,311 votes needing to be annulled respectively from the three regions.

The analysis of the petitioners, however, paints a different picture if the votes to be annulled are analyzed with respect to the total number of eligible voters in the various regions.

The Western, Brong Ahafo, Upper East, Eastern and Ashanti Regions are the regions which, with respect to the total voters register, recorded the least percentages of irregularities per the analysis of the petitioners.