Written by Gossipghana on September 2, 2013 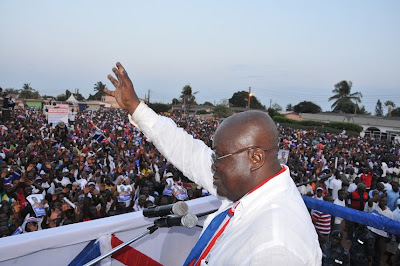 After conceding defeat following the ruling of the Supreme Court on the election petition, first petitioner, Nana Addo Danquah Akufo Addo stated his intention to take some time out of the hurly burly of politics, get some rest, “reflect and then announce whatever decision he comes out with in the not too distant future”.

However, General Secretary of the opposition New Patriotic Party (NPP), Lawyer kwadwo Owusu Afriyie popularly known as Sir John has revealed that Nana Akufo Addo who is also the 2012 presidential flagbearer of the NPP will contest the 2016 general elections as the flagbearer of the party.

“He (Akufo Addo) is also going to win the presidential seat for the first time as flagbearer of the party to the glory of God”, he told Hello FM’s King Edward.

Lawyer Kwadwo Owusu Afriyie also rebuffed claims especially from pollster Ben Ephson (who has suggested that Nana Addo should retire from active politics), saying, ‘it is not yet time for Nana Akufo Addo to retire’.

Meanwhile, the National Executive Council (NEC) of the NPP are also preparing for their various polling station, constituency, regional and national elections to vote for new executives for the party.