Popular award-winning Ghanaian actress, Nana Ama McBrown, who was involved in a fatal accident early Wednesday morning, is said to be in a stable condition.

Her boyfriend, Maxwell Mensah, is currently suffering from a fractured arm, which has been bandaged now.

Meanwhile, Nana Ama’s publicist, Eugene Osafo-Nkansah told Viasat1NewsOnline that the actress has been moved from the intensive care unit of the hospital.

Eugene said Nana Ama was earlier given some medicine to put her to sleep, and she woke up not too long ago, and he was yet to see her.

He also debunked rumours that Nana Ama McBrown is going to have her arm amputated. He said they are false, adding that those also spreading rumours that she is dead are not true.

Nana Ama McBrown and her boyfriend we involved in an accident Monday dawn, at the Lapaz end of the N1 Highway, as they were returning from a movie shoot. A car from nowhere suddenly smashed their new Range Rover car. 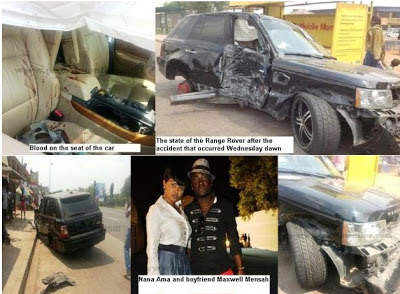 joycelyn aduakye, miss west africa gh 2012 to host the big fashion give away