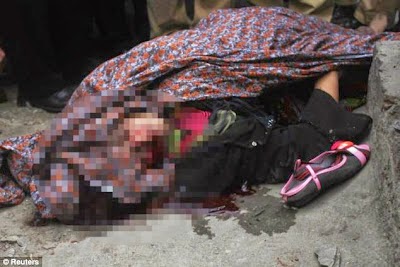 A pregnant woman has been stoned to death by her own family in front of a Pakistani high court – for marrying the man she loved.Nearly 20 members of the woman’s family, including her father and brothers, attacked her and her husband with batons and bricks in broad daylight.
Farzana Parveen, who was three months pregnant, was killed before a crowd of onlookers in front of the high court of Lahore.

According to Daily Mail, Police official Naseem Butt said the 25-year-old had married Mohammad Iqbal, with whom she had been engaged for years against the will of her family. Her father had filed an abduction case against her husband, which the couple was contesting, her lawyer Mustafa Kharal said.Kharal said Parveen’s relatives waited outside the court, which is located on a main downtown thoroughfare.

As the couple walked up to the court’s main gate, the family members fired shots in the air and tried to snatch her from Iqbal
When she resisted, her father, brothers and other relatives started beating her, eventually pelting her with bricks from a nearby construction site, Iqbal said.

Iqbal, 45, said he started seeing Parveen after the death of his first wife, with whom he had five children.
‘We were in love,’ he told reporters.