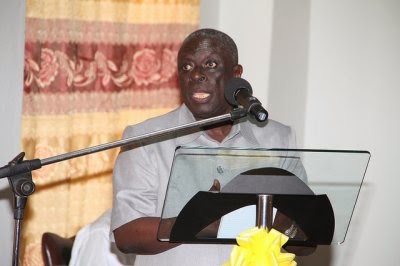 Reports reaching GBCwebcast say Paul Victor Obeng, popularly known as PV. Obeng chairman of the National Development Planning Commission is dead.
The Senior Presidential Adviser died Saturday at a hospital after he was reported to have collapsed at the Agape Filling Station at Spintex Road in Accra.
Mr Obeng is a Mechanical Engineer, politician and chairman of the Kwame Nkrumah University of Science and Technology council.
In 2010, he was appointed by the President John Evans Atta Mills administration as chairman of the National Development Planning Commission (NDPC).
Obeng is the chief consultant and Chairman of OB Associates, a public and private sector consulting firm and chairman of Ghana Agro and Food company (GAFCO.
P. V. Obeng served as the chairman of the Committee of Secretaries under the Provisional National Defence Council regime (PNDC) from 1982–1992.
He served as Presidential Adviser on Governmental Affairs under the National Democratic Congress (NDC ) from 1992- 1997.
P.V. Obeng also served as Chairman of the Ghana Investment Promotion Council (G.I.P.C.) FROM 1992- 1997.
He has been nominated by President John Dramani Mahama as a Senior Presidential Adviser at the Presidency.
P.V was at the Royal Senchi for the National Economic Forum in Akosombo.
May his Soul Rest in Peace.

NPP will lose 2016 if we field Nana Addo – Alan Kyeremanteng﻿