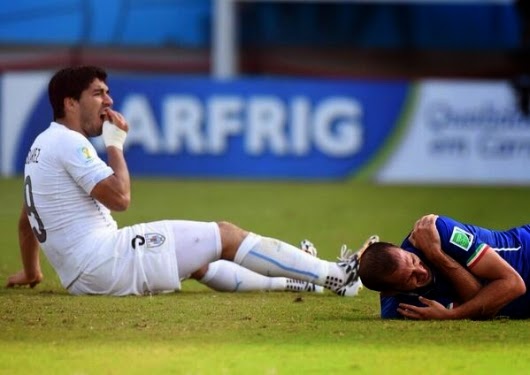 FIFA has confirmed it will investigate the clash between the Liverpool striker and Italy’s Giorgio Chiellini
Luis Suarez faces a worldwide ban of up to TWO YEARS for his latest biting incident at the World Cup.

The Uruguay striker clashed with Italian defender Giorgio Chiellini during their crucial group match in Brazil.
Footage appears to show the Liverpool player sinking his teeth into his opponent as they tussled in the box.
FIFA has announced it will investigate the incident with the Liverpool striker likely to face a lengthy ban if found guilty.
A FIFA spokesperson told Press Association Sport: “We are awaiting the official match reports and will gather all the necessary elements in order to evaluate the matter.” 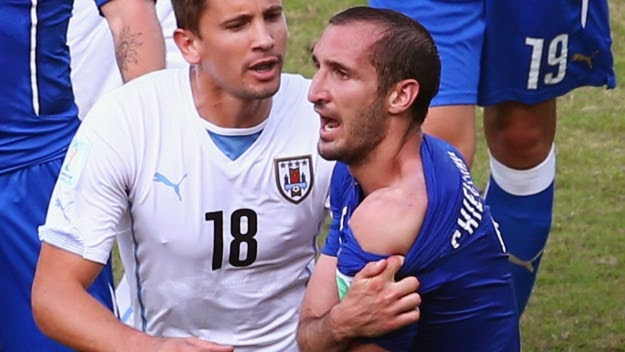 FIFA’s disciplinary code sets a maximum ban of 24 matches or two years, but the longest ban in World Cup history was eight games for Italy’s Mauro Tassotti for breaking Spain’s Luis Enrique’s nose in 1994 with an elbow.
Meanwhile, Jim Boyce, Britain’s FIFA vice-president and head of FIFA’s referees committee, expressed major concerns about Suarez’s actions.
He said: “I have watched the incident several times on television. There is no doubt Luis Suarez is a fantastic footballer but, once again, his actions have left him open to severe criticism.
“FIFA must investigate the incident seriously and take whatever disciplinary action deemed necessary.”
Teeth marks were clearly visible on Chiellini’s shoulder following the incident – but the referee took no action.
Minutes later, Uruguay scored from a corner and went on to win 1-0 and qualify from their group ahead of Italy.