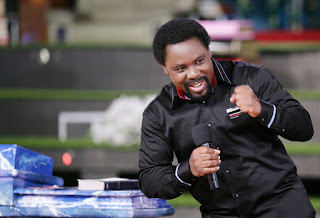 Prophet TB Joshua has said it is untrue God had told him to tell Ghanaians that he country’s December 7 presidential polls would not elect a clear winner but would be eventually decided in a second round of voting.

Several news outlets reported over the weekend that the Nigerian prophet had prophesied or predicted a two-round poll for Ghana just as he accurately predicted a three-round for Ghana’s 2008 presidential polls.

The Nigerian prophet on Friday used his official facebook page, TB Joshua Ministries, to deny the report and explain a few issues.

“Ghanaians, after thinking all round, I never knew what bad I had done to some Ghanaians, who specialize in telling lies, fabricating falsehoods to malign me and my ministry on the pages of newspapers and websites.

“For how long will I reply these? Many of such falsehoods have been written and published before now, even to the extent that when I see a vision for the nation of Ghana, I have to say it in parable, e.g. the word ‘revolution’ I said last time on Emmanuel TV and published in many Ghanaian newspapers e.g. Daily Graphic.

“I am supposed to itemize the word ‘revolution’ in three stages but because of different perceptions by detractors who would give different meanings to it.

The word ‘revolution’ is a fundamental change in a social system.

It is also a great transformation in a given policy, occasioned by different circumstances or experiences of life, e.g. nature.

“I said in my last prophetic message that there would be a ‘revolution’. It was in parable. I used the word ‘revolution’ because I don’t want the detractors to use it for their selfish purpose.

The word ‘revolution’ is broken into three segments e.g. circumstances that could be caused by nature, politics, circumstances beyond human redemption. I am praying for the nation and the leaders.

“Let us all come together and stand for the nation in prayer. May God answer our prayer.

“Ghanaians, don’t listen to the fathers of lies; they cannot force me to speak what God has not said. Enough is enough; touch not my anointed.

“My people in Ghana, we all fight similar battles, just camouflaged differently. Once again, all the stories were not from me. If there is any prophecy, you will see it on Emmanuel TV.