the weed was fake, blame the ghanaian media – chris brown 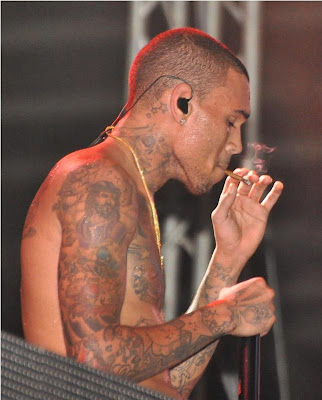 American music star Chris Brown has broken his silence on the alleged weed he smoked on stage during a performance in Ghana.

Chris Brown was alleged to have smoked “weed” on stage during his performance at the Hope City concert at the Accra Sports Stadium on March 5.

The act has received a lot of flak from civil society organizations and the general public. Notable voices that condemned the act included Minister of State and Member of Parliament for Wa Central, Rashid Pelpuo and Metropolitan Archbishop of Accra, Most Reverend Charles Palmer-Buckle.

Organizers of the concert, Charter House, categorically denied media reports that the music star smoked “weed” during his performance at the event. According to the events outfit, Chris Brown smoked a cigar, not marijuana.

But answering a question on the incident on The Breakfast Club on New York based Power 105.1 FM, on Tuesday; Chris Brown blamed the Ghanaian media for giving a negative picture to the stage craft.

He explained that: “There is a thing I did on my whole tour called smoke by the brain. So it’s a part of the show that goes to a collage of all the songs that talk about weed and everybody knows I have a medical cause for marijuana but for me I don’t smoke it on stage.”

Chris Brown stressed that, “It’s a fake light like the way they have the pre-rolled tobacco so at every show I fake it, now that I gave the secret away, but in certain cities like Amsterdam and LA I definitely did but as far as in places where I can get into trouble I avoid it.”

“It was the press over there that made a big fuss about the whole thing, everything else was cool. It was just the press, so it made it seem like it was a situation but it was not,” he said.
Watch the interview…

michael moncar to be buried on saturday, april 6