why the 4 students were killed+[images] 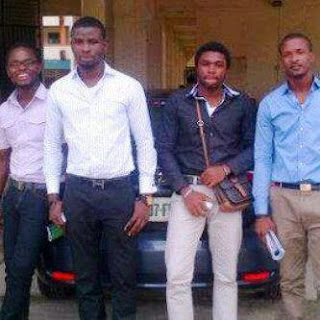 Since this incident happened sources pondered and wondered what could have gone wrong that the four boys weren’t bold enough to talk and challenge those who beat and paraded them in public, leading them to where they were eventually killed.

Now the whole issue is clearer; the boys “ignorantly” got themselves involved with a cultist who operates with a gun, all in a bid to get their money back from a debtor.

Below is what actually happened according to an insider.

An indigene of Aluu owed Ugo some money and had vowed not to pay back. Ugo who was popularly known as Tipsy had gone to meet with a fearless University guy (name withheld) to help them track the debtor who had been on the run.

‘Mr Fearless guy’ (a cultist) who was feared by many in the school ad accepted to accompany his friends to get the debtor tracked down in exchange for a percentage of the debt.

They were joined by their room-mate, Chidiaka. On their way to the place, they met one of their friend, Tekena, who knew nothing about the plan, and he joined, just for the hype as is normal with young boys of juvenile age.

That made 5 boys – Ugo, Lloyd, Chidiaka, Tekena and ‘Mr Fearless Guy’ that got to the debtor’s compound. Unknown to the other four, ‘Mr Fearless Guy’ who was contracted to intimidate the debtor just to get the money paid, went with a gun.
When they got to the debtor’s house around 12am, a fight ensued, as the debtor confronted them. A next door neighbour, a woman started shouting on top of her voice, that they were thieves, attracting other bad boys around the area, whom were mainly “vikings”, the rival cult group of the one on contract.

They swung into action by tipping the vigilante group who confronted the boys, referring to them as thieves. In the process of beating the boys, while they were trying to prove their innocence, the fifth boy, ‘Mr Fearless Guy’, who is a cultist, brought out his gun to scare the people, and he escaped, leaving the rest four at the mercy of the villagers.
The explanation they tried to give fell on the community’s deaf ears as the people insisted they must be killed….and unfortunately they were lynched!

Note:- this story is an eyewitness account from the 5th boy who escaped. He narrated this to Ugo and Lloyd’s friend who has pleaded that his identity be kept secret…
MAY THEIR GENTLE SOUL REST IN PERFECT PEACE……
see their images