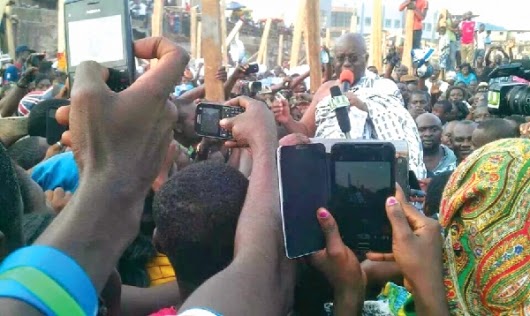 He was received by a large number of traders, including most of the victims, who repeatedly chanted “Our Saviour, Nana!”

This was after Nana Akufo-Addo and his entourage had attended the funeral of  Wereko Brobby, the father of former Chief Executive Officer (CEO) of Volta River Authority (VRA), Dr Charles Wereko
Brobby,  at the Jackson Park near Prempeh Assembly Hall in Kumasi.

He joined Mr John Alan Kwadwo Kyerematen, another aspiring flag bearer of the NPP; the National Chairman of the NPP, Mr Paul Afoko; Chief of Staff in the Kufuor administration, Mr Kwadwo Mpiani, and other party functionaries and members to share the grief of Dr Wereko Brobby and sympathise with the bereaved family.

Nana Akufo-Addo acknowledged the plight of the victims and told them he decided to pass by after the funeral to console them.

He could not have the opportunity to speak much but expressed optimism that he would emerge victorious in the upcoming NPP presidential primary and that when voted for in the 2016 presidential election, he would turn the fortunes of the country around.

He asked the victims to keep their cool heads, join his campaign and patiently give him all the votes for the betterment of all.

Last Thursday night, fire swept through a portion of the Kumasi Central Market and hundreds of shops were burnt beyond repair.

The Spirit Of Entitlement – Getting Money For Doing Nothing

Ghanaians To Demonstrate Against US Embassy In Ghana