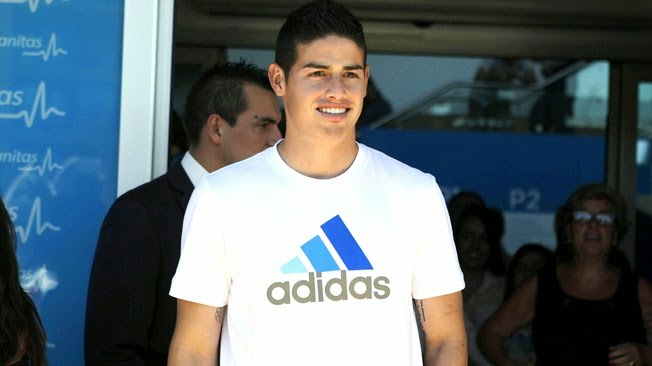 Real Madrid have agreed a deal to sign FIFA World Cup™ adidas Golden Boot winner James Rodriguez from Monaco, the European champions have announced. The Colombia international has agreed a six-year contract with Madrid and underwent his medical with the club on Tuesday morning. He will be presented on Tuesday evening.

“Real Madrid have reached an agreement with Monaco for the transfer of James Rodriguez, who will join the club for the next six seasons,” a Real Madrid statement read. “The player will be presented today, Tuesday 22 July, at 20:00 (Spanish time), in the Santiago Bernabeu’s presidential box. Following that, James Rodriguez will take his first steps on the Santiago Bernabeu’s pitch wearing the Real Madrid shirt and will attend the media in the press room.”

Rodriguez was one of the revelations of the World Cup, scoring in each of Colombia’s games as they reached the quarter-finals of the competition for the very first time, eventually losing 2-1 to hosts Brazil. In total Rodriguez scored six goals at the World Cup to finish as the leading scorer – one clear of Thomas Muller – while his stunning 25-yard volley against Uruguay was voted goal of the tournament in a poll which involved more than four million FIFA.com users.

His signing comes less than a week after Madrid brought in another of the World Cup’s star performers in Germany’s Toni Kroos, who moved from Bayern Munich.
The club would like to take the opportunity to thank James for the role he played in getting the club back to the Champions League.

Rodriguez began his professional career with Colombian side Envigado before moving down to Argentinian club Banfield aged 17. His performances for the Buenos Aires outfit attracted the attention of Porto, who signed him for £4m in 2010, and three years later he joined Monaco for £38.5m after helping the Portuguese side win a hat-trick of league titles and the 2011 UEFA Europa League.

The left-footed forward scored ten goals in 38 matches in all competitions for Monaco last term as they finished second in Ligue 1 behind Paris Saint-Germain. Big-spending Monaco said they had not been looking to sell Rodriguez but described the deal as “one of the most significant transfers in football history”.

A statement on asm-fc.com read: “The club would like to take the opportunity to thank James for the role he played in getting the club back to the Champions League and wishes him the very best for the future. The club had no intention to sell the player, however the time came when the solution of a transfer was considered to be the most beneficial solution for all parties.

“Monaco is proud to be a party to one of the most significant transfers in football history. Monaco is a club that will continue to grow and remains focused on the future. More than ever it has the ambition to strengthen the team and continue to progress for next season.”

Last 2 Weeks Most Difficult Of My Life – Asamoah Gyan @ASAMOAH_GYAN3